The final event of the Smart Start project was held 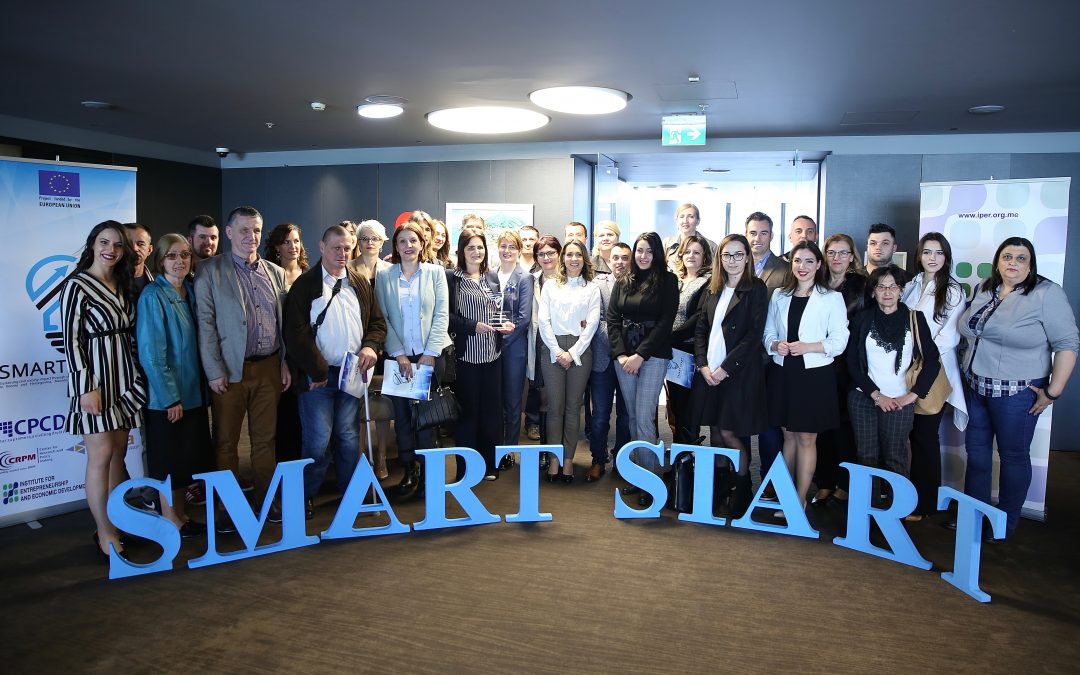 The final event of the project “Sustainable Impact of Civil Society Organizations through Social Entrepreneurship and Innovation in Bosnia and Herzegovina, Montenegro, Northern Macedonia, Serbia and Turkey” was held on April 12,, known to us as Smart Start. Smart Start is a regional project aimed at creating a favorable environment for the development of social entrepreneurship. Activities were implemented in five countries in parallel in Bosnia and Herzegovina, Montenegro, Serbia, Northern Macedonia and Turkey.

IPER representative Biljana Sekulic said that the project was implemented in five countries, that during its implementation there were many challenges, taking into account the fact that there is no legal framework that regulates social entrepreneurship.

„The project was tasked with creating a favorable environment for social enterprises, strengthening their long-term sustainability through grants schemes, encouraging networking and sharing knowledge and experiences, promoting and integrating good practices from the region, ” said Sekulić.

She recalled that the first activity of the IPER was a public invitation to organizations to join if they wanted to develop social enterprises, explaining that they had received 51 applications, of which 49 had entered a narrow circle, “and after that we published a list of 20 which have entered the Smart Start Education Program “.

As she said, in August 2017, they had ten grant grants in the amount of 5,553 euros, and in the framework of the competition for ductile innovations, they supported two other organizations with smaller grants.

Sekulić assessed that civil society organizations can be great incubators of social entrepreneurship.

„Within the project, we have learned that it is necessary to provide them with support both financial and capacity building support and mentoring. Social entrepreneurship is an excellent basis for the development of a good economy that follows the standards of the European Union when it comes to resolving social and social problems, “said Sekulić.

She believes that resolving social problems can start from civil society organizations, assessing that it is necessary to ensure that the civil sector has a framework in which it can operate.

„It is necessary to have an adequate legal framework for social enterprises, start up funds and working capital, counseling and metrology, creating a positive attitude towards social enterprises, continuous development of knowledge and skills, as well as promotion of good practices and similar stories, ” said Sekulić.

A reprensentative for the Center for the Promotion of Civil Society in Sarajevo, Damir Zeković, speaking in a video message, said that after 40 months of implementation, the Smart Start project achieved incredible results.

„Behind us, over a thousand hours of education, over 200 mentors in the countries of the Western Balkans and Turkey, 100 organizations that participated in the program, 330 thousand euros were allocated for 60 civil society organizations and a lot of lessons learned, “said Zekovic.

He believes that the story would not be complete without all the countries of the Western Balkans taking part.

Montenegrin Business Alliance representative, Milan Dragić, said that social entrepreneurship in Montenegro has not yet been recognized as a specific form of activity, that is, a form of performing an economic activity.

„Consequently, it is not directly recognized in the applicable regulations. One of the basic preconditions for the development of any form of dual entrepreneurship and entrepreneurship in general is its recognition and definition in the existing stimulating regulatory framework, which enables and supports its work”, Dragić said.

He noted that the institutional framework for social entrepreneurship has similar shortcomings as the regulatory framework.

„In Montenegro, there is no state authority directly responsible for this area. The existing competencies of state bodies relate to other areas that, to a certain extent, are related to social entrepreneurship. Our obligation is to change this situation as soon as possible, “said Dragić.

He invited the competent institutions to include the definition of a social enterprise in the draft law on companies, since this act has not yet been adopted.

Lejla Abdić, a representative of the Parents Association, who received the Grant within the Smart Start project, explained that they were in the dilemma about whether to conduct commercial activities through a non-governmental organization or to establish LLC.

„We concluded that NGOs should remain unprofitable, so we decided to establish a LLC. This is how Creative Lab – our social enterprise was created. We have commercialized the site roditelji.me, we are doing event management and CIK CAK Schneider’s , ” said Abdić.

She explained that within the Smart Start, they renewed the workshop, got two new industrial machines, and actively launched the production of children’s canvas toys.

„We have branded CIK CAK Schneider’s, we have our site, we got a certificate from the Institute of Public Health and the Ecotoxicological Center. We are currently in the active sales phase. We are not sure whether the CIK CAK Schneider’s will give us a profit, but that’s something we want to stick to, ” Abdić said.

Marko Maraš, founder of the web platform seljak.me, also awarded the grant, said that his idea was to create a website where people who are engaged in agriculture can sell their products or buy them.

„Since the beginning of the site, we did not have a definition of whether it would be a company or an NGO, and for the beginning, NGOs were established. After the funds were obtained, thanks to IPER, I decided to start a company, with the goal that one day social entrepreneurship will be regulated, “said Maraš.

The site seljak.me, as he explained, offers free advertising.

„At the website, we currently have educational texts, free advertising, maketing, detailed promotion of agricultural events. On a monthly basis, the site visits 20 thousand users, with over 100 thousand visits, “said Maras.

He said that many people ask him why he does not charge ads.

„I want to give motivation to farmers to stay in the villages, to start more intensively in agriculture, not to look at agriculture as a hobby, but as an entrepreneurship, “said Maras.

Miluša Žugić, a representative of the Association for help of persons with psychophysical development who, with the help of the IPER grant, opened a hairdressing and beauty salon where people with disabilities work, she said that the project was based on the improvement and expansion of the services of the first hairdresser salon in Montenegro in which people with disabilities work.

„Three years ago, we opened the first hair salon and hired two hairdressers with disabilities. However, since this was something completely new in Montenegro, we have learned a lot through the work of this salon. We have seen that it is necessary to expand services so that the salon can work. So, through this project, we expanded our services, and the salon became a hairdressing and cosmetic, ” said Zugić.

As she pointed out, the motive for opening a hairdresser’s salon was to create a social enterprise that will train and hire people with disabilities.

„This hairdresser will, I hope, contribute to the sustainability of our Association, “said Žugić.

IPER Director Dragana Radevic said that she believed that the implemented activities in the framework of the project empowered each organization individually to independently and directly use EU funds in the future.

„What is most important for us, through the project, we have established cooperation and built mutual trust with all the organizations and mentors who participated in the project. We already have new projects on which we work and which we are preparing, ” said Radević.

She announced that today, with organizations that received grants, will submit an initiative to the Ministry of Economy to include the form of a social enterprise within the framework of the ongoing public debate on the Law on Business Enterprises.

At the end of the event, thanksgivings was given to the representatives of the institutions, organizations and mentors who participated in the project, and a special plaque was given to Miluša Žugić from the Association for helping people with psychophysical development.